“I’d like to get rowboat back on the water. We could take it to Horseshoe.” Year after year I heard those same two sentences. Phil and his dad scheme about all the projects and activities that they would like to do at the cabin. To him, rowboat was a thing of beauty. To me, it was the old boat that had been lying against a tree for the last twenty-ish years. It was full of spider webs, and lord knows the animals that were probably living under it. Lichen had begun to attach to the sides of the vessel and the once shiny aluminum had become dingy and unimpressive. Truly, I didn’t have much love for the old rowboat.

Low and behold we made it up for our week at the cabin and there was the rowboat, gleaming in the bright Minnesota sun. Something he had dreamed about for years had happened, and he was determined to get me as excited about it as he was.
“Let’s go on an adventure.” He attached a small motor on the back of the boat and declared that our boat was ready for a voyage to Horseshoe Lake. Long Lake, our lake, is attached to Horseshoe Lake by a small creek. We have never been able to get to the other lake because we never had a boat small enough to not get stuck in the mud. Enter, rowboat. 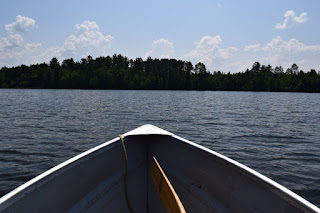 We buzzed across the lake using the small motor until we made it to the shallow creek. He pulled the motor out of the water and said, “Now we row.” I wasn’t really expecting to get this exercise, but I obliged knowing how much this adventure meant to him. As we rowed the branches extended into our path, overgrown from the many years that it was not disturbed. “It’s like we’re going back in time,” he said excitedly. Bugs swarmed. The boat kept turning off course with the current beneath the hull. Apparently my poker face was broken that day and he could tell that I was getting irritated. “Let’s stop for a minute to look around.” We took a break pulling the old wooden oars from the water and tucking them inside the boat.
“Take a picture!” 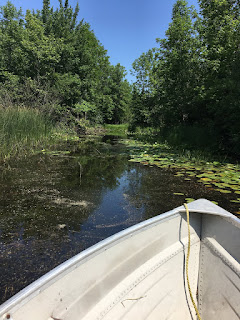 I grabbed my phone and clicked to capture the shot. Though it wasn’t an adventure I would have taken without his encouragement. I’m so glad that I didn’t miss this view or our journey together.

Now the rowboat has a new life and makes a great subject for a picture. We had this one printed on canvas to remind of our the great, sturdy old boat and our adventure on that hot summer day. 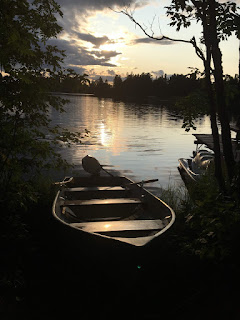 Email ThisBlogThis!Share to TwitterShare to FacebookShare to Pinterest
Labels: SOL